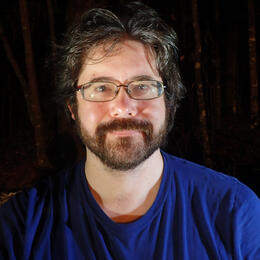 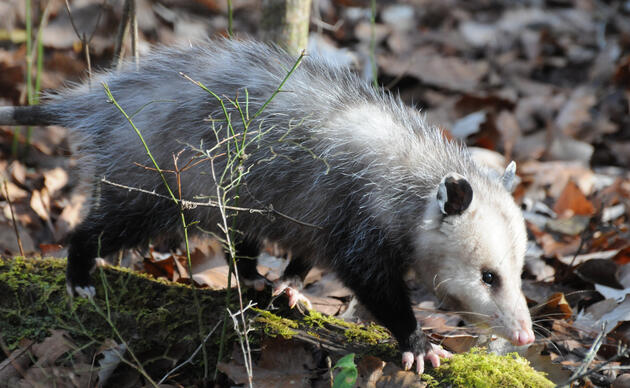 Mouth open ninety degrees with more teeth than any other mammal in North America, arching its back with its hair raised while hissing and turning slowly to face you as its long hairless tail curls around itself and it begins to release a pungent odor as an additional deterrent - The Virginia Opossum (Didelphis virginiana).

That is most people’s first impression with one, anyway.

They get a bad rap, being referred to as rat-like and stupid due to their tendency to be slow to react and often get into situations they can't hope to get out of, like when they slide down into trashcans and end up stuck there, maw gaping up in fear at whoever peers down to look at their misfortune. But have you ever heard of an opossum destroying property, attacking pets, or keeping people up at night with their noises? They prefer to be as discrete as they can and keep to themselves (okay so apparently there is some bad blood between opossums and skunks, but still).

When you consider the intelligence of an animal, always consider their senses. For sighted humans, our vision tends to dominate how we interpret the information around us and it reflects on how we judge animals for their own behavior. For instance, saying that something has beady black eyes is never used as a compliment. But opossums can't help it; they are extremely near sighted. During the day, their eyes appear entirely dark, but their actual iris is a mere pinprick. At night, car lights in the distance are probably just foggy blurs to them.

An opossum’s world is dominated by scent and touch. Their long nose gives them an incredible sense of smell, and their even longer whiskers give them a sphere of sensory input around their head that far outrivals our own sense of personal space. They even have whisker-like hairs on the ends of their fingers. If they consider it food, they will find it (just like me at 1AM when I know there’s cheese somewhere in the house).

A study in 1987 determined that they are capable of learning tasks and that they learn no worse or better than any other mammal, despite having smooth brains that are proportionately smaller than most other mammals. In another study, they scored better than dogs for learning and have also shown up rats for solving mazes. Their memory is excellent, especially when it comes to remembering where food is commonly found. But they're also limited by an incredibly short lifespan for an animal their size, which averages just two years in the wild (they start to age quickly past that point). So, they're not stupid, they're just doint the best they can with what they have.

The benefits of opossums outweigh the negatives by a long shot. The issues they cause (being unsightly, getting into trash cans, eating your cat food, and getting run over by cars) are our fault. The first issue you can solve by taking a long walk alone and reflecting on your values. The second one you can solve by getting a better trashcan. The third can be done by not leaving food outside. Opinions on outdoor cats aside, put the food where opossums can't get it; they are excellent climbers but terrible jumpers. And the fourth...well, animals in the road are always a problem, but opossums are there because they're after roadkill carrion. Roadkill is a sad cycle, so all I can say is just be mindful and careful when driving at night. Foxes can run 30 mph. Opossums can only run 4 mph. Again, they're doing the best they can.

And here are the benefits of having opossums around:

- Opossums are highly resistant to snake venom. They will devour venomous snakes and live to eat the tail. I mean tell the tale. Studies are being done to see if the proteins in opossum blood that neutralizes venom can be used to help humans in the same way.
- Opossums are resistant to rabies because of their lower body temperature. They can eat sickened animals like bats (per the CDC, bats are the leading cause of rabies transmission in the US – If a bat is on the ground don’t pick it up!) without getting sick themselves, effectively reducing the spread of rabies.
- Opossums readily eat mice and rats. Rodents aren’t strong carriers of rabies, but they do carry other diseases and unlike opossums will damage property. Rodent dens also smell, so an opossum can’t miss them.
- Opossums eat ticks. Opossums have raspy tongues like cats and groom themselves habitually, and any ticks they find are just a bonus treat to keeping clean. They help control tick populations by eating thousands a year.
- Opossums help clean up carrion, sort of like nocturnal vultures, only with furless tails instead of featherless heads. They will even eat the bones if they can; they have powerful jaws for crunching.
- Opossums eat cockroaches. If that is not enough to make you pick up and hug an opossum - well, you probably shouldn’t; opossums have well defined comfort zones. They will also eat lubbers (the hundreds of tiny black grasshoppers in your yard that turn into a handful of large yellow grasshoppers later) and won’t get sick.
- Opossums make almost no noise unless frightened. They are some of our quietest wild neighbors. They have vocal cords and are capable of making sounds but choose not to.

You should consider opossums beneficial allies, even if one hissed at you during your childhood. I hope the next time you see an opossum in the neighborhood, consider them to be a good neighbor, and maybe gently help them out of that trashcan.